As scientists, we place huge importance on the communication of our results. We spend lots of time on editing, revising, and formatting so people can understand what we did. We also write a lot of code, so why aren’t we investing the same amount of love? Enter, flake8.

It’s incredibly important that we write following community standards so when other people read our work, they don’t have to think about how it’s organized. For scientific prose, this usually means the IMRD (introduction-methods-results-discussion) format. In Python, my current favorite programming language for science, this means using a standardized number of spaces for indents (4), using triple-double quotes for docstrings in the beginning of each module, class, and function, and lots more.

It’s pretty intimidating to figure out style. For english prose, Strunk and White wrote The Elements of Style. For Python, Guido van Rossum wrote PEP-8 and Raymond Hettinger presented Beyond PEP-8. Even with these resources, it’s still hard to learn which are rules and which are more like guidelines.

This post is a short explanation of how I use flake8 to keep a consistent style in the code in my Python projects. There’s a similar command line tool for fixing the style in R projects that’s already built into most operating systems - rm -rf *, but I won’t get more into that here.

It’s pretty easy to get up and running with flake8 - just run pip install flake8 then use it from the shell on a python file like flake8 my_file.py or flake8 my_directory/. Then, it outputs a list of problems that need to be fixed on a line-by-line basis in your code. 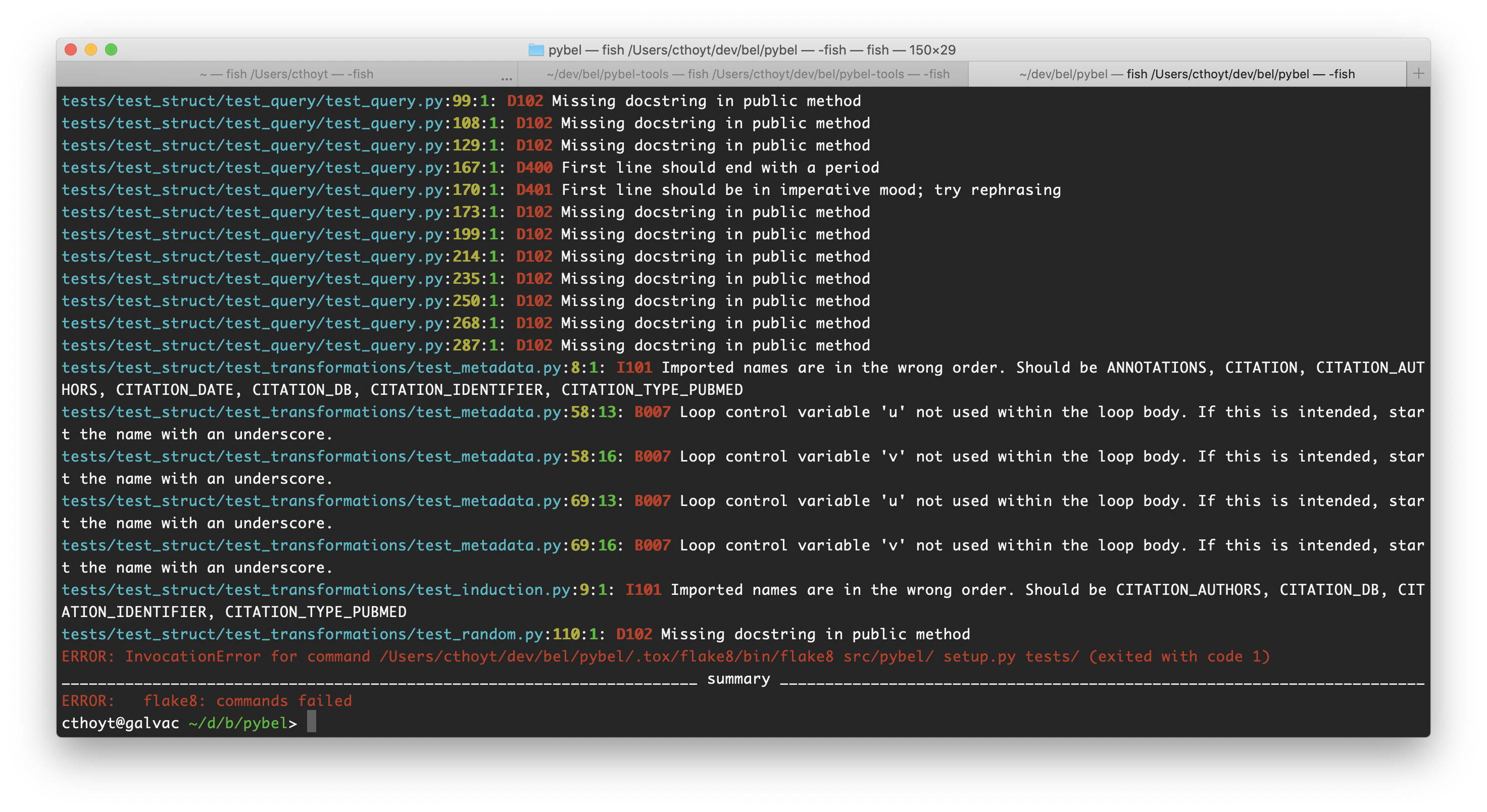 You can also install plugins with pip like that extend the kinds of things it checks. A few that I install are:

In each of my repositories, I put all of the information on how to install flake8 and its plugins then run them in a tox configuration under the [testenv:flake8] header so they can easily reproducibly run with tox -e flake8. An example of part of one of my tox.ini files (which always lives in the root of the repository) is below:

First thing you’ll notice is the ignore list. This isn’t here to turn flake8 off because you’re feeling lazy. If somebody includes a change in this list in their PR, you have to explain to them that compliance is not optional, then help them work through the problem that they obviously gave up on solving. It’s actually there for you, as the project maintainer, to enumerate the flake8 rules that you don’t agree with. For example, I totally disagree with the W503 line break before operator rule. I want to write long conditionals with and statements on the first line, like this:

One of the benefits of this style is you can add more lines with only single line diffs. The other is that the reader always sees the operation that goes with each line. Same could be done with arithmatic that could incorporate not only + but also -.

Next is the exclude block. Just copy/paste this each time, since it has lots of garbage you don’t want flake8 to bother with. One of the checkers in flake8 is for function “cyclomatic” complexity. You can make the maximum number higher with max-complexity. Normally, you want this to be enforced, but sometimes there’s no way around a complex function. For this, you can add a code comment noqa followed by the error code like # noqa:W123. Again, adding tags to ignore bad style just to pass flake8 is against the point.

The max-line-length is a very contentious setting. I think 120 is fine. Some people think 78, 79, or 80 is best because of the standard sizes of old computer screens or punch cards… When I get older and I can’t read my computer screen, I’ll probably make the text bigger and change my mind about this. If you find yourself breaking up lines in a totally non-sensical, unstyled way, then you’re conforming too tightly to the rules. Sorry about the mixed messages!

I copied this again because this part is really important. You have to tell flake8 what rules you use for import order. I use the pycharm rules, which group python builtin packages, then 3rd party packages, then my packages. The application-import-names is a place to list what are your packages.

Last is the format entry, which gives the nice colorful output. Copy paste this! I borrowed mine from Scott Colby.

After all of that, I set up Travis CI to run tox every time code is pushed to the repository. If you’re working in a team, you probably do something like the fork/pull request or branch/pull request workflow on GitHub to support doing code review before merging new code. The best part is that there’s a big box on each pull request that checks if flake8 passed (among other tests), which means that there were no errors detected.

I encourage my teammates to make pull requests as soon as they start working on code. GitHub even has a “draft pull request” mode now. However, before asking anyone to review your code, it has to pass flake8. And obviously, no code that isn’t passing flake8 can be merged.

This is a very painful process to get people used to. I’ve done it with many groups of people and always got pushback. However, everyone who has gone through the process with me has come out the other side happy that they did it. It’s important that when you start enforcing coding rules on other people that you are a resource for them - when somebody is frustrated by a flake8 error code they have never seen, they will likely forget how to use Google. They will probably ask you for help. You have to resist the urge to send lmgtfy links to them and be patient. Becuase eventually, they will do it on their own, and spread the gospel of flake8.

While a good arsenal of flake8 plugins provides a solid foundation, it’s not all that needs to be done to make your code readable and look good. Just like with reading and speaking, the best way to develop a sense of style is by reading lots of code (with the caveat that reading poorly written code probably won’t teach you much). Within the rules imposed by flake8, there is lots of space for style. If you watch lectures from David Beazley, you’ll notice a very different style from Raymond Hettinger, and also from me.

Now that you’ve made it to the end of this short guide, I wish you the best of luck on developing your own style!

Are you working with people who are particularly unsusceptible to Travis CI emails or checking the big red box on pull requests? You could try getting them set up with pre-commit hooks, which run the style checks locally any time they try and push (even if it’s to a branch) and it will give them the message in the console.

Is style not your thing at all / you’re not ready to let go of your identity as a Java/Perl developer? Maybe consider Black, which actually re-writes your code in a deterministic style. I don’t live by it, but it’s a great tool to run on a code base that’s never been loved before going back and stylizing it.