In a previous post, I described how to formalize the information about a research organization using Wikidata. This post follows the same theme, but about this time about a given researcher. Not only can you follow this post to make your own scientific profile easier to find and navigate, but you can also use Wikidata to improve the profiles of your co-workers and collaborators.

There are several other places besides Wikidata for putting your scholarly profile. The first (and worst) is by making a resume in an awful Word document or PDF. Much like what ends up in english prose in scientific texts, this is where knowledge goes to die. The next less bad is to put it in a closed repository like LinkedIn , ResearchGate, Scopus, Loop, or one of many others. These might be nice, but don’t forget they’re companies and do not want people to be able to use their troves without paying up. The runner-up is ORCID, which is absolutely amazing for providing persistent identifiers to individuals, linking published work in high-profile repositories like PubMed, and in some cases linking grants. While it will be the cornerstone of this tutorial, it ultimately falls short as a tool for integrating the wide variety of information available about any given researcher. So who’s the winner? Wikidata, of course! It has an incredible flexibility for creating new relationships and a first-class notion of scholarly works, awards, affiliations, employers, and the relationships between them that make it a perfect place for storing information.

Anyone can edit Wikidata, meaning you can create an entry for your curmudgeonly PI who wouldn’t be caught dead making a profile on this new thing called “the internet”. Even better, there are several people in the bibliometrics community who have created bots for importing and aligning information from external sources that make the entries that you supply so much more rich overnight (e.g., some bots automatically translate the descriptions of pages into new languages, some import publication metadata, some align identifiers with external resources).

The ORCiD identifier is the single unambiguous identifier for each researcher.

As unique as you are, the truth is your name probably isn’t all that unique. ORCID was founded specifically to help solve the problem of name ambiguity in research. Want to learn more? Start here! #openscience #openresearch #namedisambiguityhttps://t.co/Q2J1bVrolc

It’s super intuitive how to put information in here. There are a few minimal things to include to make it possible for people to find you:

I happen to enjoy spending time to maintain my ORCID profile, and here’s what it looks like: 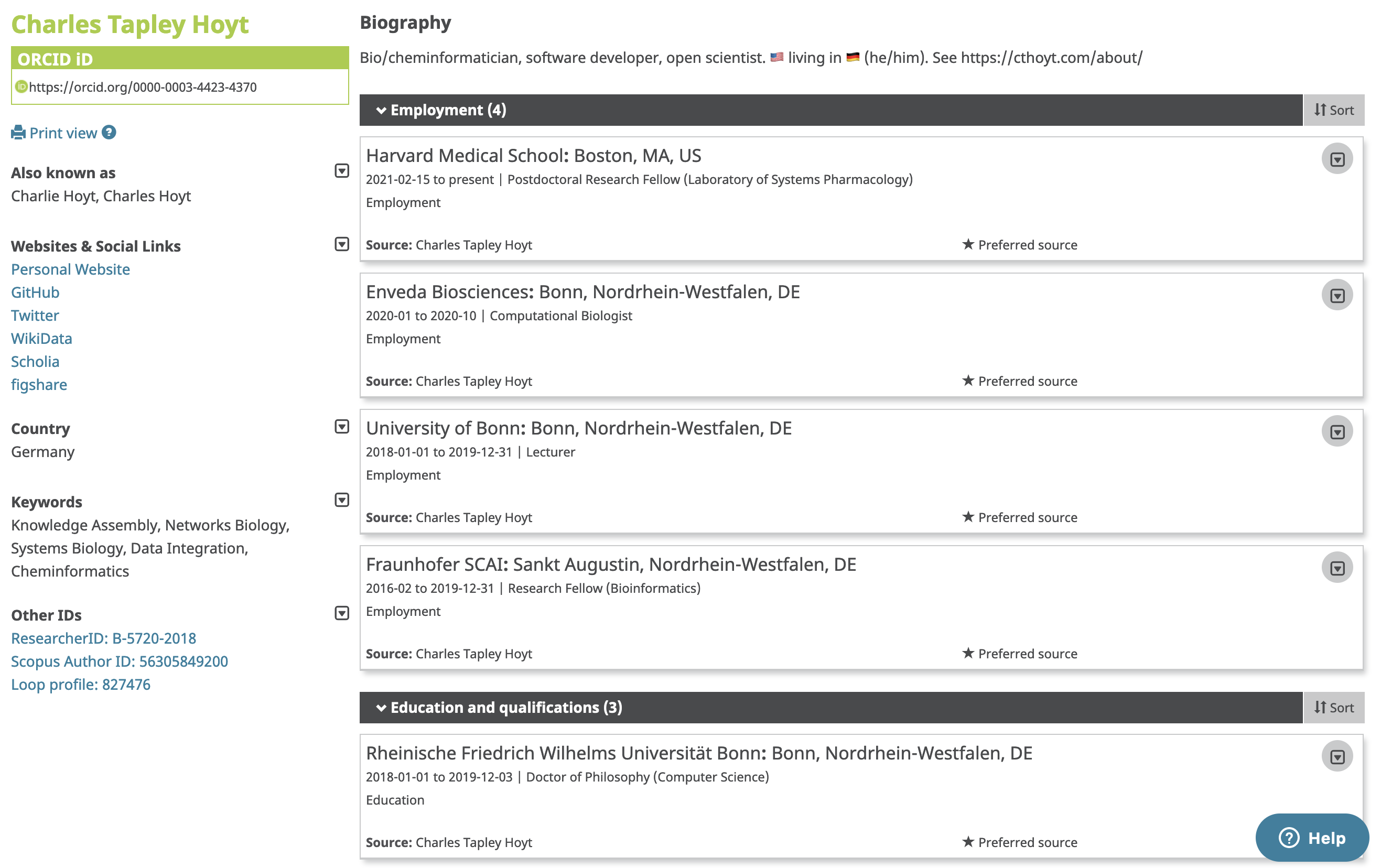 I’ll reiterate the short summary I gave on Wikidata from my previous post:

There are lots of working groups that maintain its ontology (i.e., the rules for how curation should be done) around certain domains, such representing organization structures. This means there are lots of tools already built in to Wikidata for potential curators like you and me to create rich pages for their organizations.

One of the curation rules shared across all domains in Wikidata is that each entity should have a “type”. This means on the page for Albert Einstein, there is a relationship stating he is an instance of a human. The “instance of” item on Wikidata is a special kind called a “property” and is one of the places where the ontology lives - there are specific rules for each property on how it should be used in a relationship, like what’s allowed to be the subject and what’s allowed to be the object. For”instance of”, there are no rules about the subject. However, the object of the relationship where “instance of” is the property should be a “class” of thing. It wouldn’t make sense for the type of another entity to be an instance of “Albert Einstein”.

One thing to note: use the Wikidata search bar to see if there’s already a page for the person you’re looking for! It’s a big problem if there are duplicate entries on Wikidata. Scholia also has some tools for looking people up by ORCID or other identifiers that might be helpful.

Ontology for Researchers (and other Humans)

Unlike an organizations, all researchers will have the type of human. Typically, humans have certain pieces of information associated with them using the following properties:

I’d highly suggest doing all of these before moving on to the next few sections, which have quite a few bells and whistles.

Some of the affiliations and accomplishments will require going even deeper into your curation and making additional Wikidata entries. For example, many awards probably don’t already have a Wikidata entry. Same is likely true about your academic thesis.

The ORCID identifier is definitely the most important, but Google and DBLP often pre-index researchers even if they have not got an ORCID, so this might be the best you can do for some researchers.

There are tons of other IDs you can link as well as other properties. When I was working on my Wikidata entry, I used Egon Willighagen’s as an example. I’d suggest browsing through ours to go to the next level.

I’ll refer back to my previous post on curating information about an organization, since it works basically the same way.

One of the important things I mentioned before is to add lots of synonyms for your name, especially in ways they might appear in journal articles. 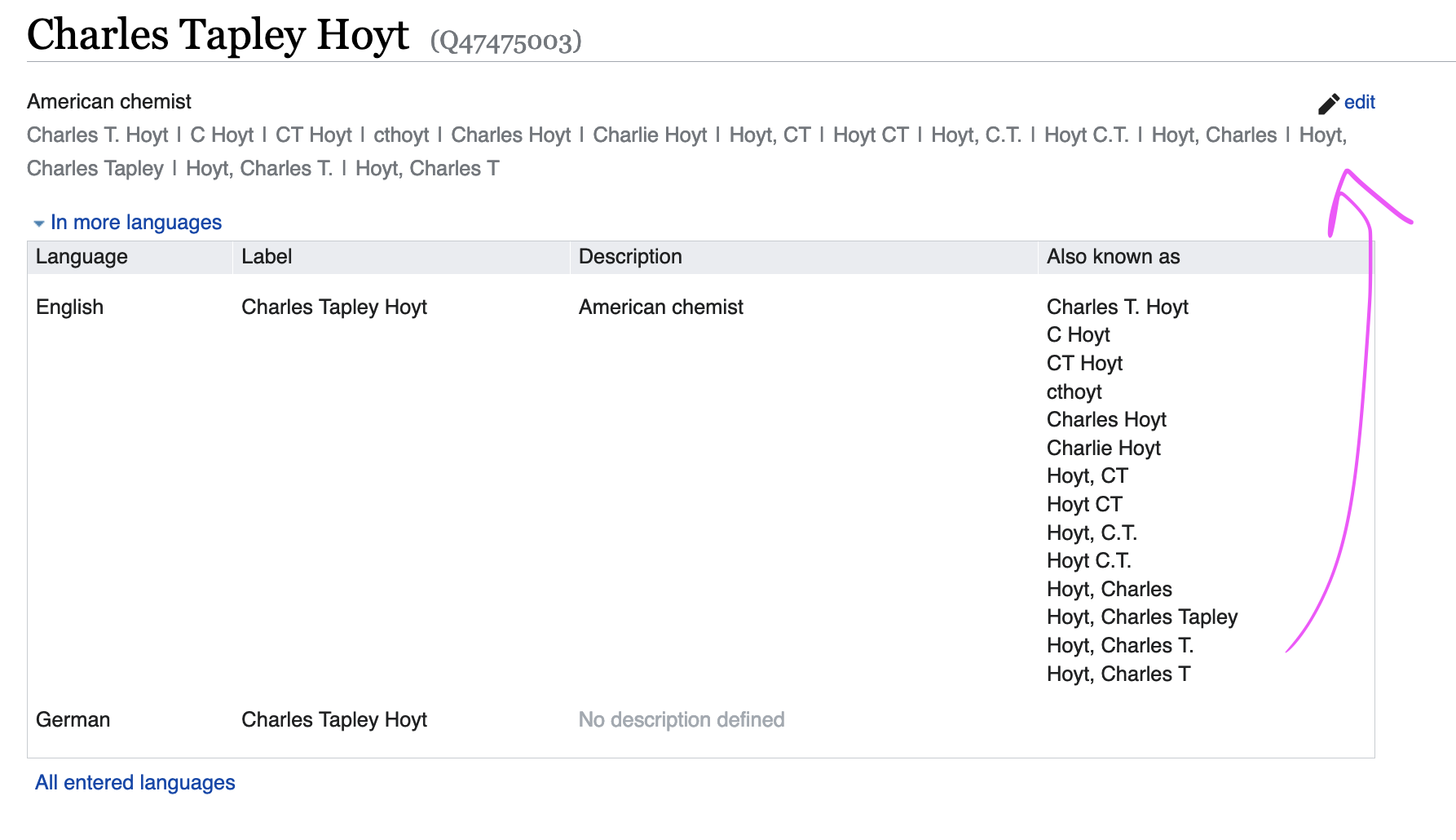 One part that’s really cool is the co-author graph:

When you start off, there won’t be much here. Luckily, it has a curation link that takes advantage of the synonyms on the Wikidata and helps connect papers that are already on Wikidata to the given researcher’s page. Here’s the link for mine (though I keep it pretty up-to-date and it’s likely empty): https://scholia.toolforge.org/author/Q47475003/curation

There’s quite a bit more with respect to getting papers and associations between researchers and events like conferences, but this is already a great place to start.